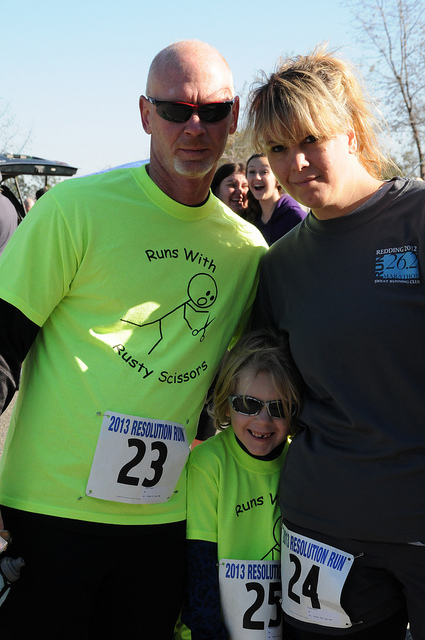 What an AWESOME team run this was!

We had a turn out of 13 of our team members running in this one!  We had 6 spectators cheering us on as we ran in!

It’s the day after the race and I am hearing on Facebook about how everyone is nursing some sore legs.  My daughter, Kara was walking like she was beaten with a baseball bat or had hip replacement surgery.  Last night my toe was still cramping, but that was from the doozy hike/run that Lester, Ben and I did a few days before the race.
I might have purposely left out the details of the elevation loss and gain of this trail run so people wouldn’t back out. I have GOT to stop doing that. ;)  I was just so happy to have all of us out there to cheer each other on.  It was 100% better than last year.
I beat last year’s time by 9 minutes. I’m pretty darn proud of that.

Birdie, Victoria and I decided that this year we are going to do 1 5k race each month in the year of 2013.  We got January out of the way, but Victoria and I have another one before the month is over.
February is the one I am the most excited about doing though.
I gave the option to Birdie to pick our Feb. race because she was going to do this Resolution run for Jan.  She put up 3 options she wanted to do and I checked the routes.  The first one was through a residential area and it was lame. The other one would give us an option to wear pink and the other one had a cute owl and had the same route as the one we could wear pink.   I narrowed my choice to the two that ran along the river.   In order to make the choice I would have to check where our registration money would go.
I opened up the Getty Owl page and I began reading where it goes. I had no idea what SMA was and I had to keep looking up what SMA stood for.  Then I found the blog.  Hmmm. Maybe I can find some pictures from the last race.   I began to read.  I started blinking back tears as I got deeper into the blog.  The blinking was no longer working, I had let out a sob and the tears poured down my face.   Sitting there for a solid hour with tears I read the most amazing posts from this little girl’s mother and father.  I knew I was going to have to write her an email, not even caring if she thought I was a crazy loon.
She emailed me back and for the rest of the day we chatted through emails and with each email, I cried even harder.
She agreed to allow me to interview her for a blog post for Runs With Rusty Scissors.
I will share the link after I interview her and I am hoping that everyone signs up.  If they don’t. I hope they at least donate and get the word out about a little girl named, Getty who is going to change the face of SMA with the help of her inspirational mother and father who believe there is HOPE for a cure.

Yep. I signed up for this race and I can’t even tell you how I think this will be the one I am most proud of.