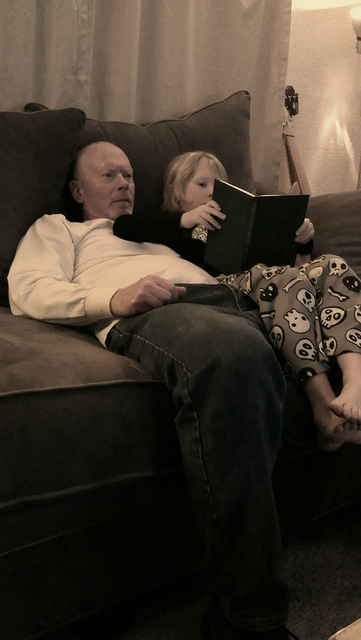 Not uncommon sighting, but tonight it felt so warm and cozy.
Alyx on the floor doing her homework. Shea watching TV on one couch and I come back into the living room to see Ben snuggled up on his daddy reading his book before bed.

This month has been turning out wonderfully.  I’m back at work now that Kara is home and picking up a few more bone chilling shifts.  The job is mind numbing, but I really love the people I work with.  The staff that I deal with are sweet and the players always have a smile or something nice or funny to say.
“I’ll try to stay out of the penalty box tonight, Kristine!” They never do though. They come skating in and I just have to laugh.  The refs are all pretty nice to me and are really happy that I have all the penalties down and don’t need them to tell me what they are. One of them doesn’t even have to talk to me, he does a few hand movements and skates off confident I knew what he was talking about.
Last night two of the refs were freezing cold at the end of the first period and I opened up my door and held up my heater for them to warm their hands.  “You’re the best!”  stuff like that makes me so happy.
I was wearing my knit hat that has ears on it and he came up to the glass to give the penalty and started laughing. “I can’t take you seriously when you’re wearing that hat!”  I then drew whiskers on the glass so the next time he came up it looked like I was a cat. He doubled over laughing.  I think making people laugh is my favorite thing.

A couple weeks ago I had a skunk walk right up to me when I was sitting outside reading. It scared me so me so much that I was actually paralyzed with fear…and now I think I have an irrational fear of them because every time I walk out the door, I look around.
Alyx and I were talking about the fear of driving in the city and I remembered a time when it scared me too.  In the last few years I have gotten over so many fears, but I think skunks might just need to stay on that list because I don’t have a way of conquering that fear now.

Victoria, the girls and I went to Redding last weekend for a 5k in my old hometown.  It was such a beautiful run and I wasn’t in a big hurry to get to the finish line because I was told it was a fun run. Fun runs aren’t timed.  I was dicking around with my music until I found a good song and since I didn’t have anyone around me, I was singing back to Victoria, “BEAUTY SCHOOL DROP OUT!” I belted it out and was skipping with this one little girl and her parents.    Then Usher came on and I was doing spins in the middle of the run, keeping an eye on where Victoria was and making sure she was doing good.  It was such a cool run.  As I neared the finish line, I saw the timing system. SON OF A BITCH!  Oh well, another slow run to add to all the other ones I have ever done.

I got my Getty Owl Awareness package in the mail today.  We are having a team meeting soon about the race so I plan on handing out the cards and bracelets and giving everyone their mission of Tell 5.
I let Kate know that I got it and I was so excited to be doing her interview soon. She got to take Getty to the zoo today. What a blessing that must have been for her.

This upcoming months I have a lot planned.  The Getty Owl Run, my 41’st birthday (YAY!), Sam’s birthday, her visit, A trip to Vegas, a 5k there that Victoria picked out.

The first month of 2013 summed up as…thankful.